Cantaloupe fresh off the vine is a thing of beauty.  It is so sweet and so juicy it will need to take center stage on your plate.

But some gardeners who love cantaloupe don’t grow it in their backyard garden because the vines take up so much space.  I, for one, love cantaloupe far too much to let a little thing like limited space stop me.  So what did I do?  I did what I always do…I went vertical.

This simple arched trellis of mine can easily support eight cantaloupe plants – far more than I would be willing to plant if they needed ground room to sprawl.

How did I build that amazing structure, you ask?  Well let me tell you all about it.  I knew there were a number of factors to consider when deciding what to use as a trellis for my melons.  First, most cantaloupe varieties grow very long vines, so I knew I would want something that was tall enough to allow the vines to grow up and over.  (This trellis is over six feet high, with the sides four feet apart.)  Second, since cantaloupe are a heavy, dense fruit, you need a very sturdy trellis that can handle the weight of a bountiful harvest without collapsing.  And finally, I wanted something that had tight enough gaps to make it easy for the vines to climb the structure with minimal help from me.  I opted for the same welded wire I used to build my potato towers.

Like I mentioned above, I wanted a trellis that was a little over six feet high at the top and four feet from side to side.  So I measured out my length of wire and snipped off the amount I needed.

I then hammered four U-Posts into the ground just inside the points that would be the four corners of my trellis – since the trellis is going to hold a heavy load, I opted for slightly bigger U-posts than the wire might usually call for and I hammered then as deep as I could for maximum stability.  I planted my posts so that the open U was facing the inside of the trellis and the hooks were facing out.  Once my U-Posts were in place, I attached the welded wire to the posts using the hooks on the posts and zip ties.

My choice of the welded wire made it easy enough to bend into the arch I wanted, but lacked some strength in that very arch that needed some extra support.  For that, I took a stick of 1/2″ PVC, grabbed it out towards the ends and gently bent it into a curve that matched my trellis arch.  At the point it was simple as pie to slip that PVC curve up inside the arch with the pipe fitting fairly well into the open U of the posts.  The final step was to add a few zip ties to hold the PVC in place.  At that point, the pressure of the PVC pushing out against the U-Posts in an attempt to straighten, coupled with the zip ties, will make a very sturdy arch trellis that is all ready for your cantaloupe vines.

For the watering of the cantaloupes, I ran a soaker hose on a timer along the sides of the trellis as you can see in the picture above.  I also like to take advantage of any empty space in the garden, like the one in the middle of the trellis, to squeeze in another crop of something – in this case onions.  I knew the onions would grow during the cooler season before I planted the cantaloupe, and be harvested before the cantaloupe vines took over the area.

Next step was to plant the cantaloupe.  I planted several varieties, some from seed and some from nursery transplants, all along the welded wire sides.

As they grew, I encouraged them to weave up through the trellis rather than grow along the ground.

When they actively started climbing, they continued to weave through the trellis on their own, but I watched for vines trying to wander off the trellis from time to time and corralled them back onto the arch.

Once the vines had gotten long and happy on the arch, and the weather had heated up, I  started getting little baby cantaloupes hanging all over the trellis.

Cantaloupe vines are pretty strong and keep a tight hold on the fruit as it grows, but with the melons hanging out there in space, it is a good idea to offer them a bit of support.  My choice was to buy these mesh produce bags with drawstrings in bulk online.

The place I purchased these no longer carries them, so I have been on the hunt for a new supply.  The ones I found at HarrisSeeds.com are not the same, but close enough.  You want something big enough to hold the full grown fruit, but not so big that there is WAY too much bag.  And that drawstring is pretty important, as you are about to see.

Once the fruit starts getting big, it’s time to GENTLY slip it inside a bag and then tie the drawstring to the trellis so that the bag takes some of the weight.

The bag will help protect the growing melon from birds and other pests, and take some of the stress off the vine.  When it is time to harvest, you simple untie the bag and pop the cantaloupe off the vine.

One of the other benefits of the mesh bags is that when a cantaloupe is perfectly ripe, it will separate from it’s vine.  Should the cantaloupe reach complete ripeness before you harvest it, that beautiful melon will separate from the vine due to the fact that it is hanging from it and fall.  Without the bag, tragedy might result.  But with the bag, the fruit falls safely into the bag and waits patiently for you to come back out to the garden and find it.

If, however, a melon forms on the OUTSIDE of the trellis wire where it is supported by the trellis itself, you can decide whether you feel a bag would be beneficial or not.

This one that grew on the top of my arch, for instance, is safe and sound up there with no need for support.

But this one, that grew on the side, is more of a question – it might be fine, but it still might fall to the ground when it ripens.  In the end, I put a bag around this one for safety.  Just couldn’t risk that awesomeness smashing to the ground.

Now a quick word about trying a shorter trellis.  I did a shorter trellis last year with garden gate sections that was super sturdy, but only about three feet high.  The vines enveloped it in no time and it took a lot of effort to keep them from wandering off into the garden.

So I do highly recommend going with a tall structure for these vining fruits.

All that is left at this point, it admiring and enjoying your fabulous cantaloupes.

Fresh melon from the garden is a treat worth the work, so don’t let having a small area to garden keep you from planting them.

So good!  Oh my goodness!

Now get out there and garden!! 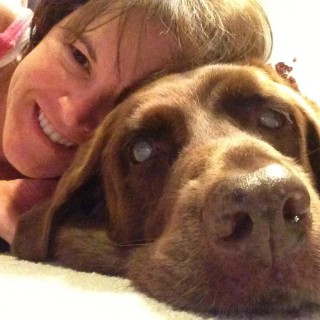 I am a passionate gardener who is always looking for new ways to use my small space creatively to get the most out of what I have to work with. I am almost always joined in my garden by my big brown dog who keeps a watchful eye out for any squirrels that might want my produce.